An infected nail will not cure on its own

Fungal nails are nails (on the toe or finger) that are infected with a fungus or yeast.

Onychomycosis is the medical term for a fungal nail (‘fungal: mycosis – nail: onycho’) that can occur on toenails and fingernails. Fungi are microscopic organisms that do not need sunlight to survive. Some fungi have beneficial properties, while others may cause infection and illness.

Fungal Infection
A fungal nail can be painful and is often an embarrassing problem. Fungal nails can create discoloration, thickening and scaling of the nails. A thickened nail can also be caused by a growth disorder or a skin disease, such as psoriasis. The nail color discoloration for psoriasis and fungal nail is similar.

Always treat a fungal nail!
An infected nail will not get better on its own; you will have to do something about it! So always make sure to treat a fungal nail. In addition the fungi that cause fungal nails are contagious. There is a chance for the infection to spread to other parts of the nail, foot or to other people.

Need some tips or advice?

Benefit packaging of Mycosan Fungal Nail for the treatment of multiple fungal nails. 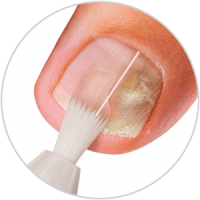